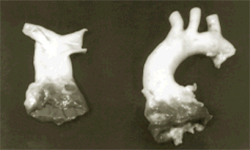 Background: A cardiac homograft valve bank with cryopreservation facility was established at the Institute of Cardiovascular Diseases, Madras Medical Mission, Chennai in July 1995. Methods and Results: During the last 7½ years of its existence, from July 1995 to March 2003, 588 hearts were processed. The valves harvested were 390 aortic, 400 pulmonary and 39 others including mitral valve, aortic conduits, pericardium etc.; 176 (29.9%) hearts were discarded for various reasons which included failure to sterilize, HBV, HIV, HCV, treponema pallidum hemagglutination test positivity, atheromatous/fatty streaks, incompetent valves, and dissection mistakes. The valves were sterilized using an antibiotic cocktail of vancomycin, amikacin, streptomycin, cefotaxime and amphotericin B in Hank’s balanced salt solution.

Of the 585 valves issued for clinical use, 247 were aortic, 323 pulmonary and 15 others (mitral valve, pericardium, conduits). Gram negative bacilli were the predominant contaminants from the hearts during the first half (July 1995 to February 1999) and gram positive organisms were the predominant contaminants during the later half (March 1999 to March 2003) of the study period. A variety of fungal contaminants like candida, aspergillus, penicillium and other fungi were also isolated from the homograft hearts at procurement. The valves were used most commonly for Rastelli procedure/right ventricular-pulmonary artery conduit (48.71%) followed by Ross procedure (23.41%).