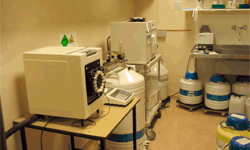 A team from the University of Louvain in Brussels announced that a second woman in their care has had a successful ovarian tissue transplant. Announcing the details of the case at the 12th World Congress on Human Reproduction in Venice 2005, they said the woman's menstrual cycle, which had stopped after radiotherapy treatment, had been restored. The principle of this type of procedure is to re-implant ovarian tissue into the pelvic cavity (orthotopic site) or to a heterotopic site, like the forearm, once treatment is completed and the patient is disease-free.

In 2004, in a pioneering procedure, the same team, led by Professor Donnez, treated Ourda Touirat, a thirty two year old cancer patient. She had a daughter in September 2004 after undergoing the transplant. At the time some experts suggested that it was possible her menstrual cycle might have restarted naturally - but this latest success would indicate that this was not the case. The latest, as yet unnamed, patient is a twenty eight year old woman who had some of her ovarian tissue removed before receiving radiotherapy treatment for sickle-cell anaemia; this treatment would normally make a woman infertile. In the transplant procedure tiny strips of ovarian tissue, one to two millimetres thick, were taken from the most productive part of the ovary. These were then cut into sections and frozen in a Planer controlled rate freezer to liquid nitrogen temperatures.

The patient's tissue was removed in 1999, before her radiotherapy treatment and was stored in liquid nitrogen after being controlled rate frozen. This is similar to the ‘banking’ of autologous bone marrow, also using Planer freezers, which is carried out prior to irradiation in some cancer treatments. In August 2004 some of the tissue was re-implanted next to one of her ovaries and she began menstruating again in January 2005. Professor Jacques Donnez, who has three Planer freezers, told the Human Fertility and Embryology conference: "We are hoping that she will become pregnant like the last patient, but we do not know how long that may take. This is just the beginning of the story, but it does prove that for a second woman we have been able to restore ovarian function." He added that the patient was delighted with the success of the procedure so far.