Another Birth From Frozen Ovarian Tissue 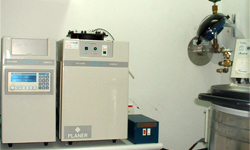 It was widely reported on June 27th 2005 that a second mother had given birth following a frozen ovarian tissue transplant involving a Planer controlled rate freezer. The mother, a twenty eight year old, gave birth to a healthy baby girl after an ovarian tissue transplant reversed infertility caused by non-Hodgkin's lymphoma cancer treatment. The case was reported by Doctors Dror Meirow and Jehoshua Dor of the Chaim Sheba Medical Centre in Tel Hashomer, Israel. They felt it was stronger evidence than in the previous case involving a Belgian woman, where an egg could possibly have come from a remaining ovary rather than the transplanted tissue.

After high dose chemotherapy, this patient’s menses ceased and during the ensuing twenty four months amenorrhea persisted. As the patient remained free of disease for two years she asked for auto transplantation of her frozen ovarian tissue in an attempt to restore fertility. A laparotomy was performed and strips of thawed ovarian tissue were transplanted to the left ovary with small fragments injected into the right. Eight months later the patient recommenced menstruation and ultra-sonography revealed a pre-ovulatory follicle in the left ovary.

Nine months after transplantation, the patient had a second spontaneous menstrual period and a decision was made to perform in vitro fertilization. After a modified natural cycle, a single mature egg with a large cumulus was retrieved which was fertilized in vitro with sperm from the patient’s husband, and two days later, a four-cell embryo was transferred to the uterus and a pregnancy resulted. The case provides some hope for women who might have their ovarian tissue preserved after cancer treatment has already started. This twenty eight year old woman had her tissue successfully removed and frozen after she had begun a mild round of chemotherapy.