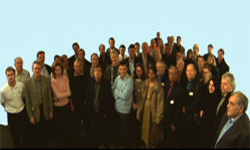 The December 2005 Distributor Meeting was to cover training and the introduction of two new products and deliberately scheduled to coincide with the retirement of Planer's extremely popular export manager of 24 years Paul Hague Workshops on the new Assure24seven range of alarm and monitoring systems were held with a high attendance. Assure24seven , which builds on Planer software experience over many years, is a new web based system for hospitals, laboratories and other storage units who require temperature logging and reporting on other critical parameters, such as carbon monoxide or humidity, to ensure maximum safety for their biological samples.

The other announcement was the arrival of Planer's new veterinary freezer, the IBF-100, to be released summer 2006.This controlled rate freezer has a small footprint, rugged appearance is portable enough to be operated and stored in the vehicle of the operator.

The meeting was intended primarily for Distributors from Europe but there were also guests from India, the Far East and the USA. All in all people came from thirty countries, out of the fifty where there are Planer Distributors. It was thoroughly enjoyed by all - the feedback forms were genuinely enthusiastic - and the two day event concluded with a farewell evening for Paul Hague at a local British pub.