A combined team from Singapore's Sincere IVF and Gleneagles Hospital, report and describe successful ovarian freeze, transplant and ICSI fertilisation in the Journal of Reproductive Biotechnology and Fertility (Dr Jaffar Ali editor-in-chief). Ovarian tissue freezing is still a novel and complicated technique which can be used clinically for fertility preservation in female children, adolescents and adults with cancer. 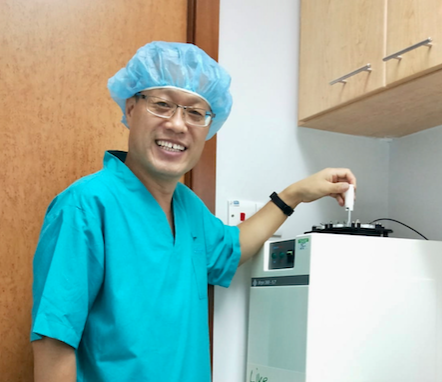 The team, led by Professor SC NG, performed the auto-transplantation of cryopreserved ovarian tissue and reestablished a regular menstrual cycle, collecting one egg - and its successful fertilisation showed ovarian function had been restored. In the paper, published early 2019 the authors (from Embryonics International, ACS Clinic for Woman and Sincere IVF) tell that the patient, initially diagnosed with a serous borderline tumour for both ovaries, but with no definite stromal invasion, has, subsequent to the intervention and to date, been well with no evidence of relapse noted.

The 37-year old woman patient, whilst healthy, had twenty years absence of fertility due to her husband’s azoospermia; she was diagnosed with ovarian cancer and an oopherectomy was laparoscopically performed in 2016 at Gleneagles Hospital, Singapore. The subsequent investigation showed serous borderline tumour for both ovaries but with no stromal invasion.

Three slices of morphologically normal tissue from the right ovary were collected and immediately delivered to the laboratory where the medullary tissue was removed from the ovarian pieces, and a total of 10 pieces of ovarian cortex tissue approximately 5mm by 5mm and about 1mm in thickness were prepared for cryopreservation (see below). The slow freezing method (Andersen et al., 2008 https://www.ncbi.nlm.nih.gov/pubmed/18603535) was employed to freeze the prepared pieces of the ovarian tissue.

All ten pieces of ovarian tissue were equilibrated at 4 °C and were then placed into cryo-vials for computer controlled freezing with a Planer Kryo-360. The initial cooling rate was −2 °C/min to −9 °C with manual seeding performed and cooling was continued at different ramps to−140 °C, when the samples were plunged into liquid nitrogen at −196 °C, and transferred to a liquid nitrogen storage tank.

Neither chemotherapy nor radiotherapy was performed on the patient who ten months later underwent heterotopic transplantation of thawed ovarian tissue. Two cryo-vials containing four pieces of ovarian tissue were thawed for transplantation on 16 March 2017. The cryopreserved tissue was placed into a peritoneal pocket in the region of the broad ligament, below the fallopian tube. Menstruation commenced two months later after induction and follicle growth was monitored in the fifth menstruation cycle with one follicle observed in the peritoneal pocket.

The oocyte was successfully retrieved after the fifth cycle, six months after transplantation and fertilised via intracytoplasmic sperm injection (ICSI) using the husband’s frozen-thawed testicular sperm. One 7-cell cleavage stage embryo was then frozen but no embryo transfer has been performed to date.

Pictured here, Professor Soon-Chye Ng, one of the authors mentions "The results of our first ovarian tissue transplant confirmed previous reports and lent support to the objective that ovarian tissue freezing can preserve fertility for cancer patients. This success demonstrated that cryopreservation of ovarian tissue and subsequent transplantation is a viable option for preserving fertility."

Worldwide, it is estimated that several thousand women have had ovarian tissue cryopreserved, but the number of transplantations remains low although it is accepted in an increasing number of countries; to date, more than 100 children have been born from this procedure worldwide (Andersen et al., 2018  https://www.ncbi.nlm.nih.gov/pubmed/29718400).

The authors conclude that although cryopreserving of ovarian tissue for fertility restoration is still regarded as experimental, successful collection of oocytes and fertilisation from auto transplanted ovarian tissue, such as here, show that ovarian tissue freezing can preserve fertility for cancer patients. Goals for the future should include optimising the outcomes of transplantation, with improved tissue quality, reduced follicle loss, shorter transportation times, and longer periods of functionality in cryopreserved ovarian tissue. Such improvement in technique is important as survival rates for cancer patients in their early reproductive life continue to improve with advances in cancer treatment.