It is now 45 years since Planer was founded. To mark the occasion, we have been taking a look at our archives to see how cryopreservation and its applications have developed over these four decades. 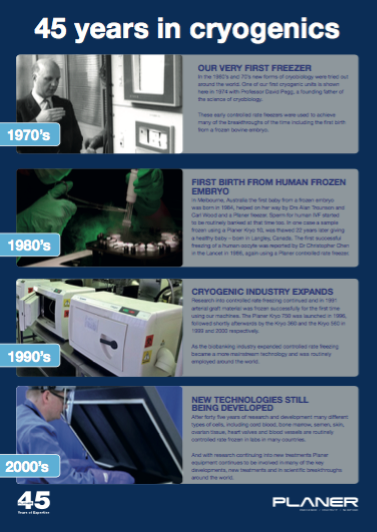 By the 1970s new forms of cryobiology were emerging around the world. Planer were at the forefront of this field and one of our first equipments is shown here with Professor David Pegg, a founding father of the science. These early controlled rate freezers allowed samples, till then difficult or impossible to deep freeze successfully, to be slowly frozen down in controlled ramps within a cryo-protective solution, for storage in liquid nitrogen and later use.  An early success was the first birth from a frozen bovine embryo.

In 1984 in Melbourne, Australia the first human baby from a frozen embryo was born, helped on her way by Drs Alan Trounson and Carl Wood using a Planer freezer. Around the same time, as assisted human fertility became established as a science, human sperm started to be routinely banked for later use, not usually stored as long as in one case, where a sample slow frozen using a Planer Kryo 10 in Canada was used to give a healthy baby – twenty two years later.

In 1986 the first successful freezing of a human oocyte was reported by Dr Christopher Chen in the Lancet, again using a Planer controlled rate freezer, the research continued and in 1991 arterial graft material was frozen successfully for the first time using Planer rate freezers. And as the bio-banking industry expanded, controlled rate freezing became a more mainstream technology - routinely employed around the world.

Many different types of cells, including cord blood, bone marrow, semen, skin, ovarian tissue, heart valves and blood vessels are controlled rate frozen and carefully stored in the cryogenic systems we supply and service. As their sample numbers increase many users take advantage of our DeltaT software which allows them to deploy one profile to several freezers, with those profiles being displayed on the same graph and each run having a time stamped compliant summary.

Investigations continue into new areas of preservation such as controlled vitrification or the mechanics of freezing such as the monitoring of freezing rates – and so Planer equipment continues to help in key developments, new treatments and scientific breakthroughs around the world.