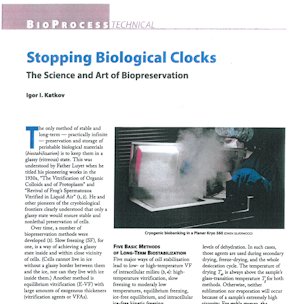 A recent article on cryopreservation by Dr Igor Katkov, well known expert in cryobiology, features Planer equipment in the explanation of slow freezing.

Dr Katkov usefully summarises the development of the use of rate freezing, writing “ …..the explosion of methods of cryopreservation ….in the 1950s ...revolutionised first the cattle industry and then blood transfusion.”  Early attempts were empirical but “ … that changed, however, with  equations for equilibrium slow freezing with minimal intracellular ice formation. With a new approach, Mazur in the US and Wilmut in the UK were able to cryopreserve mouse embryos. Since then, slow freezing has been the mainstream of modern cryobiology.”

Mazur’s and others' work in the 1960s showed different cell types would need their own optimal cryopreservation protocol depending on their properties and the type of cryoprotectants used.

With reliable modern controlled rate freezers in the lab the science behind this can sometimes be taken for granted. Of special interest to Planer users is Katkov's explanation of what he calls equilibrium freezing, where,  “ ….embryos would require a very slow pace of cooling (0.3–1°C/min) so the cryopreservation process would take several hours. In contrast, for small oblate (flat) ellipsoids such as red blood cells with an excellent surface-to-area ratio that would allow  them to lose water very quickly, the optimal freezing rate of cooling would be in the range of several thousand °C per minute. So if we consider an intermediate cooling rate such as 10°C/min, then it would kill oocytes at a very fast rate because of intracellular ice formation . But that same cooling rate is too slow for red blood cells, so they would die because of excessive shrinkage and prolonged degradation. Yet for lymphocytes that rate would be optimal. “

He stresses that the combination of concentration of cryoprotectant and the rate of cooling is unique for a particular type of cell and will hence often requires multi step protocols. An example might be the cryopreservation of human pluripotent stem cells (hESCs and iPSCs). “The introduction of a multi step cooling protocol, Rho associated protein kinase (ROCK) inhibitors, in combination with freezing pluripotent stem cells in adherent stage as they are prone to anoikis (cell death after cells are detached from an extracellular matrix) have dramatically increased survival and functionality of human pluripotent stem cells after slow freezing.”

Dr Igor I. Katkov is the chief scientific officer at Celltronix, San Diego, CA, This email address is being protected from spambots. You need JavaScript enabled to view it. and his article can be read at
http://www.bioprocessintl.com/multimedia/archive/00232/BPI_A_141204AR06_O_232181a.pdf