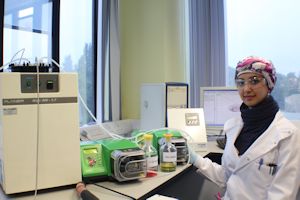 Premature ovarian failure affects 1-2% of women and can have far-reaching clinical and psychological effects and the incidence is expected to increase because of improved patient survival following gonadotoxic cancer treatment.  Although around twenty live births have been achieved to date in women receiving autografts of ovarian cortex frozen by controlled rate slow freezing, the application of the treatment is a bit limited by the ~30% rates of primordial follicle survival.

Researchers at the Universities of Nottingham, Prof Bruce Campbell, and Leeds, Prof Helen Picton, are examining ways to make cryopreservation of ovarian tissue more efficient. They are examining the hypothesis that sub-lethal cryodamage and cyto-toxicity is responsible for the higher rate of follicle loss and have been examining whether the novel Liquidus Tracking methodology, developed by Planer, could be usefully applied. The controlled vitrification associated with this technique eliminates both ice crystallisation and the cytotoxic effects of cryoprotectant at higher temperatures.

The results of one such study are to be presented at the European Society of Human Reproduction and Embryology (ESHRE) in London in July. The lead author of this publication, Feda Aljaser (pictured), supported by King Saud University, will report the results of a comparison between conventional slow freezing and Liquidus Tracking for the cryopreservation of both sheep ovarian cortical tissue and whole ovaries, in terms of post-thaw tissue damage and follicle survival in vitro. Encouragingly, the results of this comparison indicate that LT may also be used to successfully freeze ovarian cortical patches and whole ovaries, as this methodology resulted in similar levels of tissue damage and follicle survival as slow freezing. Importantly, rapid vitrification of ovarian cortical patches resulted in significantly higher levels of tissue damage and poor follicle survival.