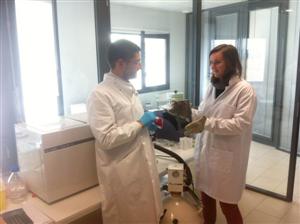 The Cell Therapy Research Institute, Lyon, France has just taken shipment of a Planer KRYO 560-16 programmable control rate freezer to be used in their program for clinical trials and biobanking. The team is carrying out a project to find the best way to store human tissues: not only for long term cryo storage - leading on to human use - but also for diagnostic purposes.

Professor Colin McGuckin and Dr Nico Forraz (Nico is pictured training Alice, one of the CTI staff) have expertise in bone marrow, umbilical cord blood, mesenchymal and adipose cell processing for human clinical trials. Now the team are extending this knowledge to develop new techniques. These techniques should allow tissues to be used not only for patients directly but also for samples which can be processed in a way that allows portions to be kept for diagnostics as a baseline when patients are undergoing therapy. Clinical trials under development include the treatment of children with hypoxia (oxygen starvation) during birth, and for facial bone repair. Interestingly, an extension of their cellular work using cell expansion and storage allows biobanking as a strategy for diagnostics in cancer patients.

The Institute was established in 2008 in Lyon, France as an independent research Institute which would work with different bodies, hospitals, and companies in a way which would be ethical and open both in the developing and the Western world.  Colin McGuckin and Nico Forraz were the pioneers in making liver cells from human umbilical cord blood as well as pancreatic, nervous and other types of tissues.