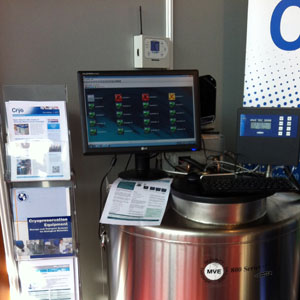 The photo shows the very first production model of our new product - TECalert - which  is designed to network temperature, LN2 level, usage and alarm status and should be of interest to customers who have Chart MVE storage vessels and controllers who up to now users have had to look at controllers on actual vessels rather than monitor them from a PC. The unit is designed to make TEC 3000 controllers, used on all high end Chart MVE vessels, visible over an existing network via Planer’s Data-Later monitoring and alarm software

Cryo Solutions of Holland http://www.cryosolutions.nl/en/home/ took the wraps off the TECalert at the latest Laborama exhibition which was held in the Kart Expo building in Brussels March 2012. Laborama is a widely attended specialist laboratory show which is held every year and attended by scientists and managers across Europe. This year the exhibition featured the Special MVE 816 AI vessel linked to TEC alert and the wireless Temperature probe of the DATA-later system. These were combined with the Planer 360 and 560 controlled rate freezers and a CS160SK liquid nitrogen tank. So visitors could see a complete nitrogen lab set up - including safety features. Richard van Woerden, chief executive of Cryo Solutions, explained that the new product was "a great addition to other alarm and monitoring systems. Our end users were really missing the availability of a product that read data, such as alarm settings and liquid levels, from their controllers. Now we have the piece of the jigsaw which links the TEC 3000 with a customers PC for hassle free use."

Laborama was an opportunity for Cryo Solutions and Planer to showcase the products and services they provide 24/7; not just for the bio- medical field but also for research and industrial customers. Planer see the TECalert as having wide applications in both bio-banking and cryopreservation in general. It will be on sale generally from April 2012. It is a new communication device for MVE Chart TEC 3000 controllers and has built-in facility to network up to 99 vessels - all for low cost. It requires just a network point to transmit this data. For further details contact Nick Pattenden at This email address is being protected from spambots. You need JavaScript enabled to view it.