We were pleased to support the UK Stem Cell User Group when they had their latest meeting at the Nottingham Conference Centre. The event was hosted by the Anthony Nolan Trust - http://www.anthonynolan.org - at the end of last November. The Stem Cell User Group was set up over 7 years ago to create a forum for those involved in the field of stem cell and bone marrow transplantation. The particular focus at the time was compliance with regulation of the sector - in addition to more emerging technologies, novel cell therapies and treatments. The group grew from a core of scientists and Quality Managers to the 40 - 50 strong regular meeting attendees who participate today. 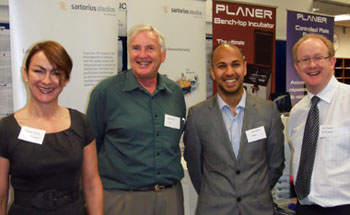 Stem Cell User Group (SCUG) Meetings have been held at various centres throughout the UK over the last few years. When staff from the Irish Stem Cell laboratories joined the group, the 11th SCUG meeting was held in Dublin in June 2010 and some 40 delegates from the UK and Ireland came. Our picture, taken then, shows Tammy Elston (Guy's), Mike Watts (UCLH), Ravi Dattani (Planer) John Fitzgerald (OLCHC). Tammy - now at King's College Hospital - has organised the last 7 meetings and does all the hard work of setting the agenda and communicating with everyone in the group - as well as raising awareness and of course sponsorship!

Other recent meetings have been hosted by the Hammersmith Hospital (London), Royal Manchester Children's Hospital and Southampton University Hospital. The biannual meeting is held in a different host centre on each occasion with IMBS and RCPath creditation for members. The 15th Stem Cell User Group, or SCUG, will be held at Leicester Royal Infirmary on the 6th July 2012.