End of an era at London Zoo 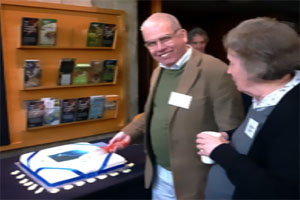 To celebrate Professor Bill Holt's outstanding contribution to reproductive biology and also the end of an era, a one day symposium and celebration was held on October 20th at the Institute of Zoology at London. The Symposium, titled “From endangered species to tracking cars; reproductive biology, wildlife and modern biotechnology" included speakers and guests from Australia, the USA, Mexico and Europe.

Organised by Jo Keogh, Rhiannon Lloyd and Rez Prathalingram the guests packed the Huxley lecture theatre at the Zoological Society of London in Regent's Park for a series of twelve talks around progress made in assisting fertility and preservation in rare and endangered species. A key speaker at the conference, Dr Pierre Comizzoli from the Smithsonian Conservation Biology Institute in Washington recently received the Early Career Award from President Obama.

An evening reception in the Mappin Cafe in the Zoo itself followed and we at Planer were delighted to show our own appreciation of the help Bill has given us over the years by sponsoring the wine and refreshments.

The photo shows Bill cutting a cake made for him and Daphne Green - who retired after 45 years at the zoo.