Frozen Assets. Advances in the science of cryobanking animal gametes.

Advances in the science of ‘cryobanking’ animal gametes are helping restore endangered populations and preserve biodiversity, writes Professor William V Holt in a recent edition of The Biologist, the Royal Society of Biology’s Magazine. 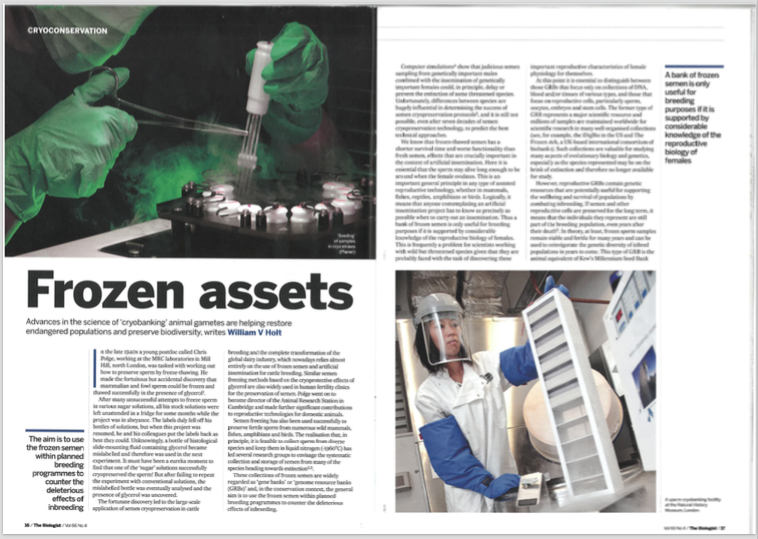 In the late 1940s a young postdoc called Chris Polge, working at the MRC laboratories in north London, made the fortuitous but accidental discovery that mammalian and fowl sperm could be frozen and thawed successfully in the presence of glycerol.

This breakthrough led to the large-scale application of semen cryopreservation in cattle breeding and the complete transformation of the global dairy industry, which nowadays relies almost entirely on the use of frozen semen and artificial insemination for cattle breeding.

Semen freezing has also been used successfully to preserve fertile sperm from numerous wild mammals, fishes, amphibians and birds. The realisation that, in principle, it is feasible to collect sperm from diverse species and keep them in liquid nitrogen (-196ºC) has led several research groups to envisage the systematic collection and storage of semen from many of the species heading towards extinction.

Whilst relatively straightforward, the success of freezing fish and amphibian sperm has permitted the serious development of sperm-based genome resource banks for these species, the same cannot be said for their oocytes. However, by refocusing their approach, some research groups have been remarkably successful in exploring the possibility that various types of germ cells could be extracted from either ovaries or testes, frozen and stored, and then used to repopulate the ovaries and testes of recipient animals.

Looking to the future, researchers are now searching for new, innovative ways to preserve viable genomes for animal breeding.

To read article in full
“Frozen Assets” – The Biologist, the magazine of the Royal Society of Biology

About the author
William V Holt FRSB is a professor of reproductive science at the Academic Unit of Reproductive and Developmental Medicine at the University of Sheffield and honorary research associate at the Smithsonian Conservation Biology Institute’s Center for Species Survival.